We worked with Neil Laybourn a mental health campaigner, to deliver pages showcasing his partnership with LinkedIn. 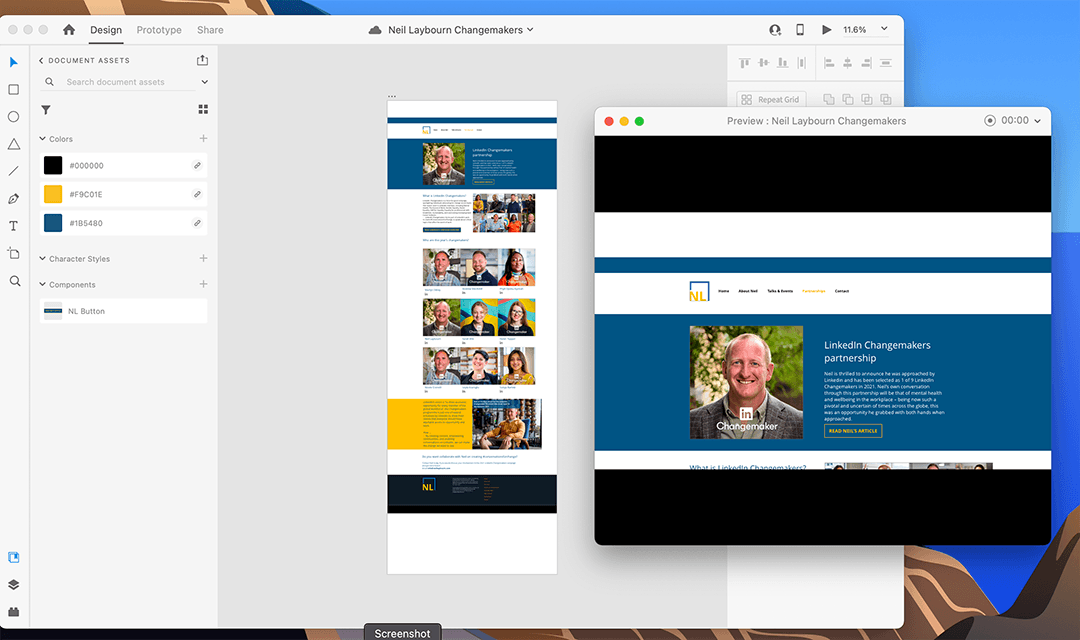 We’re pleased to be working with Neil Laybourn #manOnTheBridge who was recently named as a LinkedIn Changemaker 2021.  You might remember Neil from his role in the suicide intervention where he was able to talk down Jonny Benjamin from taking his own life in 2008 on Waterloo Bridge. Channel 4 told this powerful story in the award-winning ‘Stranger on the Bridge’ documentary, which reached millions of viewers. Neil champions mental health awareness in the workplace.
Neil needed to showcase the partnerships he is currently involved in on his website including the LinkedIn Changemakers, so we were able to quickly mockup some design layouts and integrate them into his website.
Using AdobeXD – our weapon of choice for design mockups, we presented a few layout options for him to consider. We made sure that it would work well with his existing content and retain the responsiveness we originally built into the site.

Once he was happy with the designs, we then built the pages on his site at neillaybourn.com making sure everything still worked as it should and looked as intended. Working within the confines of a custom WordPress theme meant we had to create some “hooks” to get the desired functionality and designs on the landing page for his partnerships. As the theme in use didn’t support adding tags and excerpts or summaries to pages, we added extra code to the theme’s functions file. You can find out how we did that in this article.

Do you need web design services?

If you need work done on your existing website or you need something completely new, we’d be happy to help. Fill out the form below and we’ll get in touch.

By submitting this form you agree to receive our newsletter. You can unsubscribe using the link in the first newsletter you receive. We will not share your details with third parties and will only use your information to process your request and send our newsletter to you.